Podcaster and author, Joshua Pantalleresco is on my blog today! 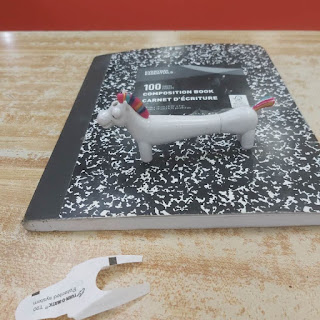 Here it is. My sister bought it for me. I almost got Ryan McFadden to sign his book with it. If his wife had seen the pen he would have had no choice.  Dang it.  But it's a cool pen right?  I legit write with it.

So this joke started way back when my sister suggested that in my current novel that I'd put a unicorn into it. Now, I said yes immediately, already plotting out its demise. Then my sister got this pouting please don't do anything look on her face, and asked me not to kill it. Well crap. Not only did she see through my plan, she stopped it cold.  Dang it. Now what do I do with the unicorn?

I figured it out eventually. My current novel has a unicorn that farts out spam ads. This cute little guy is named Roy G. Biv, and he lives in the cloud. No one's quite sure how he got there, but long ago, someone built him to advertise giant spam ads on people's phones and pcs. He still is doing it, hundreds of years later. Much like the mighty cockroach, Roy had survived his own civilization's apocalypse, and had found a home for himself inside the cloud. Johnny, Gunblade and company discover him trying to rescue the daemon Stevie Y, who had gone into the cloud hiding from zombie mobsters.

Now reading that story I imagine a lot of thoughts enter your head. Why would a unicorn fart out advertising? I have no idea, and I wrote the damn thing. I hope you got a kick out of the name, and maybe you laughed at my cockroach joke, before my next few bits of information made you go a little cross eyed.  Trust me, it's on purpose.

Writers are magicians. We're supposed to trip you out with words and images you are imagining. I'm no different. I'm playing with you, challenging your perceptions and creating an image that is as bonkers as I can possibly cram it in.
Distraction is one of my favorite techniques. I'm bombarding your imagination with as many misshapen images as possible. I'm leaving questions. What does a zombie mobster do? (And no, they are not nice zombies. Are there nice zombies? I think there should be somewhere. Hmm. Going to have to ponder that one.)
I digress. Hopefully you get the idea. Distraction is a wonderful thing. We live in a world where there are images and slogans and logos waging war for your attention. Most of them fail to deliver the surprise distraction craves in order to make it work. It's why we grow numb to the messages out there. Most of the distractions in our lives serve the same purpose.
They want you to buy. Buy me, I'm red and sexy, says fizzy bottle number one. Buy me, I'm blue and positive, says potato chip bag number two. It doesn't matter how you dress it up, the end result is buy me. We all understand business. We all need to eat.
But no one wants to hear a sales pitch. They say the same thing. They don't 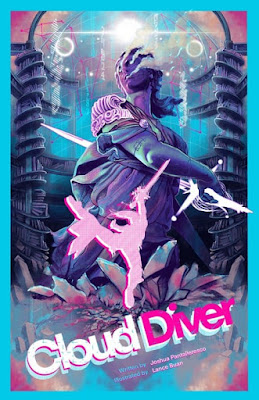 talk to you or interact with you. They are mundane, dull and no one cares. Stories can't just follow standard formula for the same reason. We've seen the twirling moustache villain. We know that the princess goes off with their wonderful prince charming. We've been there, we heard that, and some of us have even bought the t-shirt. But it's a small world after all if that's all you subscribe to.
Great writers play with those expectations. They play with you. The great ones can take whatever tools we have, whether they be unicorns or cupcakes or zombies or evil robots or whatever you want to insert and they interact and present to you the reader a different experience.  It's why I love great indy books so much. They are incredibly well told tales done in ways you may not see.
In my case, I decided to embrace the whimsical.  There is magic in whimsy and breaking those expectations in ways never conceived. In book two which I'm working on now, I am actually writing about a killer cupcake. This cupcake was the creation of a bakery company looking to make more money. So they did what all of us do when we are desperate for cash – invest in weapons.  So in their quest for making a living in their troubled times, they created an apocalyptic monster of red velvet destruction, complete with sugary pink bow.
What is the goal with distraction? The answer is simple.  Surprise.  I want to surprise you.  I want to wow you with the images I create. I want you to engage. I want you to play. I want to throw as many images into your head and make you crack up at the absurdity of it.
I want you to enjoy the experience I crafted for you.  And, if you have to go, wouldn't you want to go to the sugary goodness that is a cupcake?
And here is a great picture of a cupcake.
Great stories don't need to be silly. I like silliness, but that doesn't mean you need to create that kind of whimsy.  Stories can engage with your audience on any kind of tone you want. Tales can be told with tremendous gravity, or romantic as a country song or filled with epiphanies. All of these things are possible, provided that the reader is distracted with the tale being conjured in front of them.
My stories are distractions and escapes into other worlds. I want to play with you, and I hope you want to come along for the ride. There are unicorns and cupcakes and terrible elevator music. There is laughter, and even some tears. You can't have ups without downs.  You need to have some down notes, especially in comedy to get the jokes across. But in the end I want you to experience wonder and leave you with a great experience.
That's the real trick of any storyteller isn't it?

Get the book and connect with Josh! 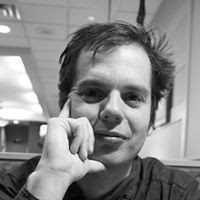 About the Author:
Joshua Pantalleresco writes stuff and podcasts too.  His forthcoming book, the Cloud Diver is his first novel, and fourth book.  Joshua always has written poetry for Mirror World Publishing, and has been published in magazines such as Onspec.  He writes a column for First Comics and has made the leap into the freelance world.
His podcast Just Joshing is fast approaching 400 episodes. He has interviewed debut novelists, New York Times Bestselling Authors, musicians, illustrators, pro wrestlers, politicians, comedians and other creative people twice a week, and reads from his work, along with other authors every weekend. He has won the Aurora for his podcast, and has been finalist for that award twice.  He lives in Windsor currently, but has been known to wander at a moment's notice.
Posted by Kat Flannery at 10:39